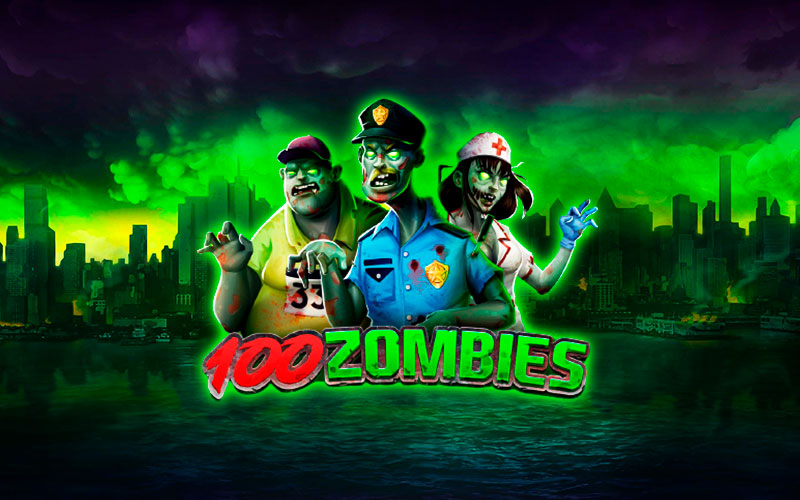 100 Zombies is among the most beautiful slots recently released by Endorphina. Per-fectly developed graphics, as well as the emotional soundtrack, delve you into the apoc-alypse world, where hungry zombies watch you from over every corner. Every player’s task is to cope with as many zombies as possible and slip from them all the jewels.

The 100 Zombies Slots is a crazy world of the living dead uprising by the Endorphina Company! Here, a great mission awaits you – to rid the city of a dangerous virus that turns common people into malicious and bloodthirsty zombies!

100 Zombies is among the most beautiful slots recently released by Endorphina. Per-fectly developed graphics, as well as the emotional soundtrack, delve you into the apoc-alypse world, where hungry zombies watch you from over every corner. Every player’s task is to cope with as many zombies as possible and slip from them all the jewels.

Besides, we would like to tell you some words about the 100 Zombies slot machine’s functionality. It has five reels and a whooping hundred paying lines, which even sounds tasty. On top of that, the online slot has great extra functions that will help you win much more than you expect. We will tell you more about 100 Zombies below.

Now, a little about the indeed tastiest thing. The maximum winnings on the 100 Zombies slot can be up to € 10,000,000! This supposes that the maximum multiplier is no more than 10,000x your stake. Important! The percent of return at the 100 Zombies slot ma-chine is RTP 96%. The evidence from practice shows that it is a very good value for games with such a stock of winnings.

While playing online slot machine 100 Zombies, you can open the active menu. The menu will change its payout indicators when the stake amount changes, and you can see them all in real time. Also, every player will be able to study in detail all the terms and conditions of receiving a bonus game.

To activate the bonus spins, you have to get three landed scatter symbols. On activation, you will be awarded ten free spins with the possibility of getting an additional ten during the game. Your task is to gather as many wild symbols as possible on the three central reels. Another feature is that these symbols freeze throughout all bonus rounds. Cover the panel completely with wild symbols to get a big winning.

Slot 100 Zombies can safely boast its heavy stock of paying symbols. There are twelve of them in total, where seven are symbols of high payout, namely:

The Random Wild function is triggered randomly on all reels. A big merit of this function is that the wild symbol freezes on the reel, which means that it can with ease complete the panel or gather the maximum combination for big winning. The Risk Game function will let you multiply your entire winnings several times, for this, you have to guess the right card of a higher value.

No doubt, the 100 Zombies Slot is one of the best slot machines released by the Endorphina Company. The impressive graphics and incredible soundtrack won’t be unnoticed by all fans of the post-apocalyptic world and will assist you in having a great time. This time we seem to say nothing about minuses since the developers have really worked hard to make the fans happy. Moreover, the game is fully compatible with mobile devices, it is excellent on smartphones with IOS, Android, and Windows operating systems. The casinova.org recommends the 100 Zombies slot machine, where you can play at the best online casinos at any place you like!