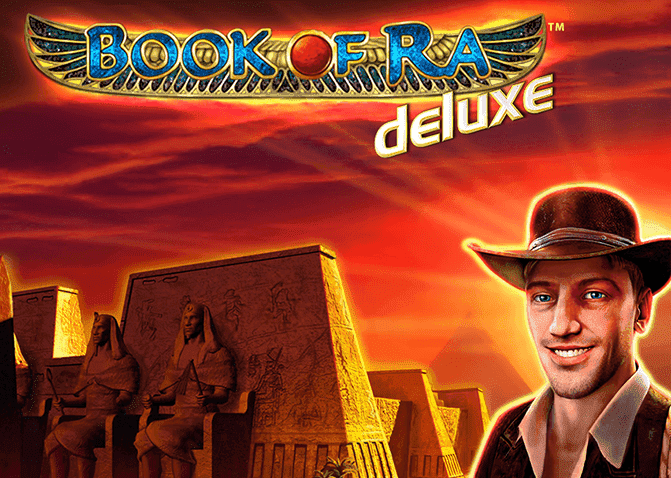 Unfortunately, Book of Ra Deluxe is currently not possible in Germany. Novomatic has withdrawn its Novoline product line from the Federal Republic of Germany until further notice. In Switzerland and Austria, it shouldn’t be difficult to find a casino that also offers Book of Ra in its portfolio for free. It attracts the gaming experience of a classic in a modern guise.

The game manufacturer Novomatic is responsible for the fact that many fans of slot machines are very interested in books, especially that of the ancient Egyptian sun god Ra.

Unfortunately, Book of Ra Deluxe is currently not possible in Germany. Novomatic has withdrawn its Novoline product line from the Federal Republic of Germany until further notice. In Switzerland and Austria, it shouldn’t be difficult to find a casino that also offers Book of Ra in its portfolio for free. It attracts the gaming experience of a classic in a modern guise.

The history of the slot machine theme begins in ancient Egypt. In fact, the first version of this game was released in 2008 and quickly became a success online. With Book of Ra Deluxe, Novomatic presents a revamped version that meets higher demands, including winning combinations. The successor convinces with an expansion of the chances, so that ten paylines are now available. As in the basic version, they can be freely selected. There were no other major changes to the tried and tested game principle.

Ancient Egypt with its myths and secrets has always attracted serious researchers, but also daring fortune-tellers like Indiana Jones. We encounter this as the most profitable symbol of the game, the researcher. When winning combinations occur, he keeps an eye on the treasuries of the pharaohs. The biggest find is the Book of Ra, which grants the bonus of a special round with free spins.

Other typical Egyptian symbols such as a scarab or a pharaoh gold mask as well as letters and the number ten also lead to winnings, which of course only pay off if you no longer play Book of Ra Deluxe for free, but actually use money. The slot machine accompanies larger winnings with small animated scenes such as an insight into Egyptian catacombs.

Although the machine is read from left to right in the traditional way, the books that gave the game its name do not need to appear coherently. This is a major advantage that not many slot machines offer. This is also the basis of the success of Book of Ra for years, which brought a whole series of imitators to the scene. Novomatic itself launched several versions of the title. Book of Ra Deluxe can be considered the flagship of the successful series.

Thankfully, Novomatic has taken more care with the game’s graphics in the updated version. The predecessor was less demanding. However, the changes are superficial, there were no basic interventions. The confident player doesn’t care. He’s been playing his Book of Ra on the same boot for years. The recipe for success of the title is not that of elaborate video recordings or gimmicks that frame or loosen the field. But the convincing principle of the game system: numerous opportunities for free spins and winnings.

Unfortunately, the soundtrack has not improved significantly. As long as no special events occur, he is content with classic daddle noises in the mummy stage – there is not much ancient Egyptian atmosphere because of the annoying jingling, even if it has been reduced compared to the original game. The machine then accompanies winning combinations, free spins and other enjoyable events with oriental music that more closely corresponds to the Egyptian motifs. The gamble button for a chance to double your winnings still lures with thrill rhythms, which is perfectly fine.

A crucial feature of the game is the special function that the book of the sun god Ra has as a scatter if it appears frequently enough. The book then flips open and sets a winning symbol that has an expansion function during the free spins. This means that this expanding symbol continues across the entire reel when it appears on at least three reels. This significantly increases the profit opportunities. During the special round, additional free spins are possible an unlimited number of times.

The book of the sun god is also of particular importance because it has the function of a game during normal play, that is, it replaces other symbols to complete paylines. The researcher brings the highest profits per spin, and the golden pharaoh mask also sheds a lot. The lowest winnings are in the letter fields and the 10, they represent playing card values ​​(J stands for the English word for “jack”, Jack, for example). Numerous possible winning combinations and good chances of free spins guarantee lasting fun.

The great success of Book of Ra after the market launch in 2008 meant that Novomatic was not the only one to launch a whole series of similar games such as Book of Maya, Book of China and Book of Hera. A strong competing title is Play’n GO’s very popular Book of Dead. It offers a good alternative for players in Germany, for whom Book of Ra Deluxe is not available online.

This alternative can also be tried out free of charge. Where Book of Ra can not be played for free without registration, you do not have to do without getting to know the entertaining game principle. It has won over many players around the world over the years and is considered one of the most successful on the market.

Like a wild card, the book of the sun god Ra replaces all other symbols.

Three books in any order act as a scatter and trigger ten free spins.

In free spin mode, the book displays an expansion icon that can spread across the entire reel.

The risk button allows you to bet a profit on revealing a card. If you have correctly predicted whether it is a red or black card, the profit increases. If the forecast is incorrect, it will be lost.

The slot machine lets you choose between one and up to ten paylines for each spin. That’s one line more than in the Book of Ra without deluxe features. The minimum bet is € 0.05 per payline. A maximum of € 50 per round can be wagered. If the researcher is activated as an extension symbol in the special round, a maximum profit of up to € 250,000 is possible. A progressive jackpot is missing in the base game, but there is also a separate jackpot version, as Book of Ra can be played in many different ways.

Compared to the original game, the deluxe version offers a significantly higher RTP. This statistical value for the “return to player” gives an indication of the theoretical chances of winning and is a player-friendly 95.1%. Slight deviations are possible depending on the casino.

Playing Book of Ra Deluxe on the go is no problem. Special apps are available for all iOS or Android-based devices. You can choose to download or play directly in the browser. The differences to the desktop game are marginal. Playing slot machines for free is of course also possible on the go from your smartphone, as is the use of real money if you decide to register at an online casino. Casinova.org provides an overview of reputable and reliable providers.

Trying out slot machine games for free unlocks how a slot works without the risk of losing money in the first few rounds before you really understand what it is all about. Beginners in particular will appreciate this as a good opportunity to develop their personal strategy online. Virtually every casino has the so-called demo versions for its slot machines in its program.

If you really want something, the online casinos offer a special entry aid with the welcome bonus. He provides new customers with a credit that exceeds their first own deposit. It is often twice as high, sometimes it is four or five times more than you have contributed from your own pocket.

However, this credit must first be released before real winnings can be paid out. This means: The bonus amount must have been used several times for playing. The usual multipliers for this are 15 to 45 times. All values ​​above mean a significant sales target for the bonus, which only very eager players should aim for.

With the deluxe edition of Book of Ra, Novomatic has managed to completely renew the somewhat dusty title and adapt it to more modern expectations. For a good reason, the company left it with more cosmetic interventions and did not touch the proven and popular game principle. The profit opportunities are even improved. This can already be experienced if you play Book of Ra Deluxe for free, but of course it only really works in real money mode.

Book of Ra manages to remain captivating for experienced users for many games without overwhelming beginners with too many features. You can play it immediately if you have already tried out what is in the slot for free without registration.