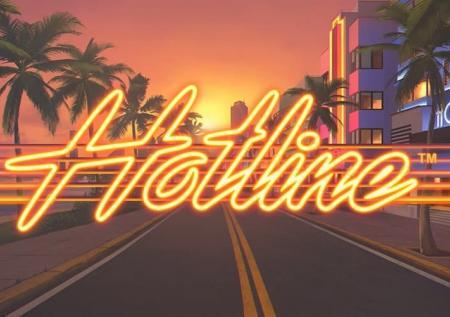 Ferraris, flamingos and synthesizer music should offer a clue to the theme of this online slot machine from Net Entertainment; it’s called Hotline, it channels the spirit of Miami Vice and it even features Crockett and Tubbs lookalikes Quinn and Rivera – keep reading to find out how it all plays out.

Hotline is a five reel slot with three rows and thirty fixed paylines; behind those near reels there’s a view of an Art Deco beachfront hotel with palm trees visible in against the setting sun. There’s an electronic soundtrack to accompany your gameplay and three lights to the left of the reels which we’ll explain shortly.

There are just six standard symbols in Hotline, they’re all related to the theme and they include the female baddie, Rivera, Quinn and three pieces of expensive jewellery.

The red Ferrari is wild and it will replace all others to help form winning matches except for the sunet scatter symbol; it’s also part of one of the feature described below.

As well as being the name of the game, Hotline is also one of the features and this particular line is marked by a yellow light to the left of the reels. The default is one line lit but paying extra (2x or 3x the stake) will allow two or three lines to be selected.

These are useful because if a wild symbol lands on a selected Hotline it will expand to fill all positions on it’s reel; it will also award a free respin with that wild reel held in place.

This is triggered by landing three of the sunset scatter symbols anywhere on reels one, three and five; you’ll receive seven free spins and during this feature and time the Hotline wilds activate they will remain in place for the remainder of the round.

It’s not possible to trigger any more spins from within this feature.

Hotline is clearly a thinly veiled reference to Miami Vice but there’s nothing wrong with that and there’s also nothing wrong with this slot; it’s an 80s throwback with free spins and an interesting betting option. It’s worth noting that the RTP increases from 96.13% to 96.70% and then to 97.04% by increasing the number of Hotlines.