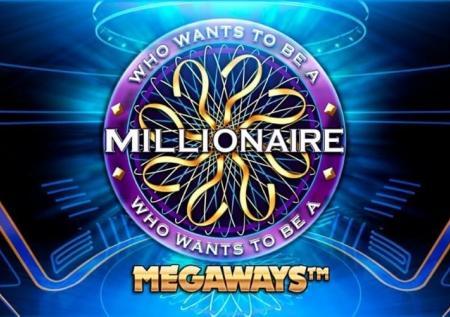 Big Time Gaming is at it again, launching a new slot machine with very high volatility, but this time in addition to the Megaways system we’re also seeing a branded theme, the first time that this is true for this developer. The basis for the game comes from the Who Wants To Be a Millionaire game show, a world-wide known brand which has a lot of potential players interested.

WHO WANTS TO BE A MILLIONAIRE SLOT FOR FREE

WHO WANTS TO BE A MILLIONAIRE SLOT INFO

The game that Big Time Gaming designed here is going to have 6 reels with the number of megaways reaching a maximum of 117,649 possible wins. The Megaways system is unique on its own, but the slot also includes features such as free spins, extra horizontal reels and options which are inspired by the game show (Phone a Friend, 50-50 or Ask the Audience). A game with huge potential and volatility, Who Wants To Be a Millionaire is not for the faint of heart.

You don’t have to pick the line bet or the number of lines, only the total amount. It would be impossible to do otherwise, as you have a different number of possible combinations each round. The slot offers a range for its bets from $0.20 to $20. The total stake is also used as a basis for prize calculations.

The biggest potential of the game will come during its free spins, and at that point it’s going to pay as much as 50,000x the stake apparently. That could be turned into a jackpot of $1,000,000, based on the numbers we’re seeing. Keep in mind though, this is a very high volatility game, so even though the RTP might be saying 96.24%, there is no telling how each session will look like.

WHO WANTS TO BE A MILLIONAIRE SLOT FEATURES

The entire system called Megaways, which Big Time Gaming has built much of its popularity on in the last year or two, is based on the randomness of each reel’s size. You could get only 2 symbols on some reels, while others could have as many as 7. As each of the 6 reels varies in size, the number of megaways changes. The most you can have is 117,649 ways to win, coming from 6 reels of 7 symbols each.

An Extra Reel is placed underneath the usual game area, giving you 4 more symbols each round. You can only get wilds in this area. It’s available during the free spins.

The Millionaire scatter should be the symbol that you want most out of this game. Three or more will act as triggers for the slot’s 8 free spins. You can gamble the free spins and win up to 50 rounds, or you can play the ones you received. There are 10, 20 or 50 rounds which are guaranteed if you reach those levels as you gamble the feature. Options to Phone a Friend, to Ask the Audience or to remove half of the options are there as well, and they’re based on the game show.

The free spins offer increasing multipliers, which go up by 1x each time you get a wave of symbols cascading in. Symbols come in as a result of empty positions appearing, once winning symbols from the previous wave are removed.

The background image is indeed based on the game show Who Wants To Be a Millionaire, but the symbols you find inside are all boring to look at. You get diamonds and gemstones for the biggest payouts of the slot, while the low ones get Royals. Big Time Gaming isn’t known for high end graphics, and they offer more of their usual style here.

Who Wants to Be a Millionaire on Mobile

Well, the Big Time Gaming Title boasts simple but quality visuals and a very good game play, so punters may expect the same gaming experience on any device. Naturally, the Who Wants to Be a Millionaire video slot is playable across all devices, desktop and mobile and you can play it in the house or on the go.

Who Wants To Be A Millionaire slot is going to be fun to pro gamblers and those that want its ultra-high volatility and a chance at a prize of up to $1,000,000. Fans of the game show don’t have much to love about its design.