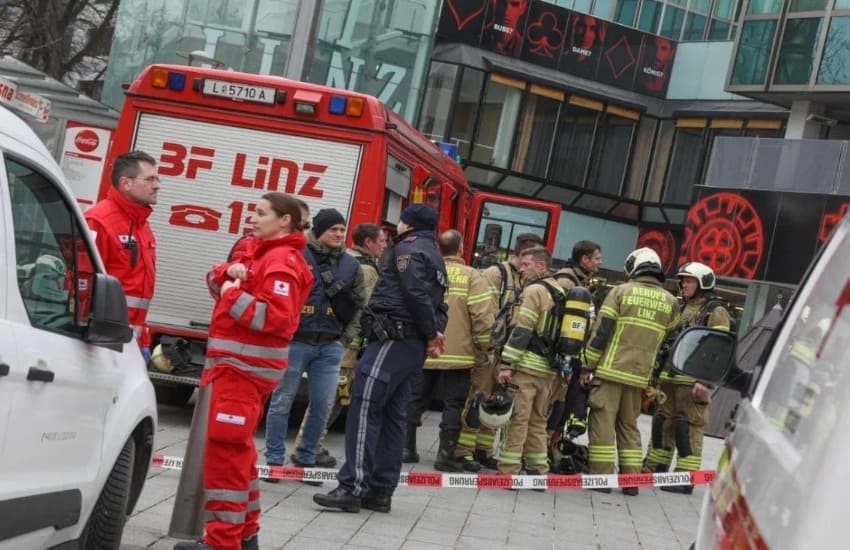 On Saturday morning, the Linz police moved out into the Schillerpark for a major operation.

Casino Linz is operated by Casinos Austria AG. The casino had to be temporarily closed on Saturday (February 8th, 2020). The reason for this step was that a false ceiling in the Casino Linz had caught fire. The investigation into the cause of the fire is currently in full swing. Fortunately, the fire started around 10 a.m., so the actual game operations had not yet started.

What exactly happened in Linz?

At around 10 a.m. the fire alarm was triggered in Casino Linz. The Casino Austria casino had not yet started operating at this time. According to the police, 16 employees were brought to safety.

The same applies to the 100 guests of the hotel. There are now reports that a hotel guest is said to have been slightly injured. However, the police had the fire under control on Saturday afternoon. In an interview, Andreas Ilk from the Linz Fire Brigade described the case as follows:

We stood in front of a really black smoke wall. Of course, the mode has changed from exploring the fire and warning system to fighting fires. That was on the first floor, in the area where the guests are and where they are playing. But the area is now free of guests in the morning. There were no people in danger. There was a smoke spread over an intermediate passage due to our positive pressure ventilation in the neighboring hotel. But you have to note right away, there was never smoke in the hotel. […] A false ceiling fire is not a classic full fire with an open flame, but there is a lot of toxic, combustible smoke.

The Linz professional fire brigade and the volunteer fire brigade from Linz’s Sankt Magdalena district were involved with around 40 people. Sometimes they had to wear heavy breathing apparatus. The scorching and burning of the plastic sheaths of cables resulted in toxic vapors that could only be avoided. The false ceiling had to be opened manually so that the fire could be extinguished.

Try to imagine – you have the best free spins of your life! You play Magic Mirror, have already had 6 extra times in the free spins and still have to play down 50 spins. Suddenly there is a fire alarm and all your profits are lost due to a fire! That is a disaster!

For this reason, One more point to the advantages of an online casino again. A player scare scenario like this cannot happen there, because ultimately the winnings are saved in the account. However, in a real fire situation, other things would be more important to me than a profit from the machine.

The Red Cross had to look after the 100 guests from the hotel. They supplied them with aluminum blankets. The inner city of Linz was largely blocked by the fire department because of the fire on Saturday morning, at least until there was a “fire out” message. The assignment lasted almost 2 hours, the hotel guests were able to return to their rooms at around 12 noon.

The casino remains closed for the time being

Investigations are currently underway to assess the damage in the casino and clarify what caused the fire. Some media already report damage in the millions, but you have to wait for the expert opinion for exact figures. The casino directorate said on the subject of resuming gaming operations:

The Casino Linz will remain closed until further clarification. We assume that at least limited operation will be possible in the next few days.

In the meantime it became known that it was supposed to be a cable fire. Patrick Minar is the group spokesman for Casinos Austria and had announced:

The casino and restaurant will likely remain closed for several months, but the jackpot casino on the ground floor will be open again from 10 a.m. to 4 a.m. on February 10.

The company Casinos Austria emphasized that despite the partial closure of the casino, there will be no layoffs of staff. The entire casino is currently very sooty.

The casino houses paintings by Anton Lehmden, a co-founder of the Vienna School of Fantastic Realism. The images should be easy to clean, but this also takes time.