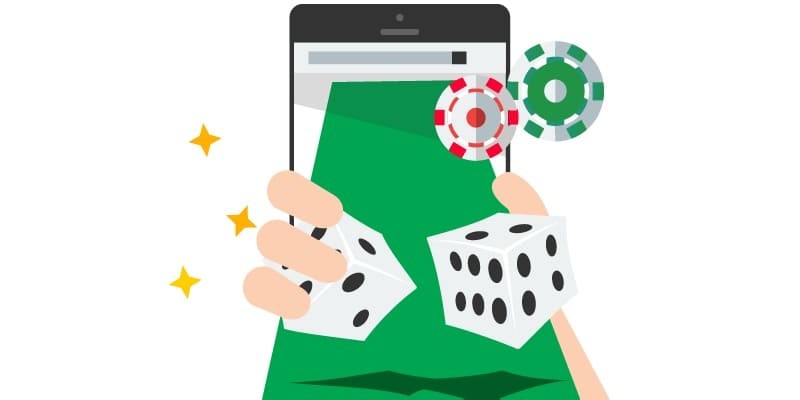 The table looks complex, it’s laden with jargon and there are plenty of unwritten rules. Fortunately, with a few simple tips, even beginners can quickly learn to play craps like a pro. But even though all the etiquette and conjecture is interesting, it is of no concern to the online player.

For those looking to play craps online, we also have some tips on dealing with that experience. One of the benefits to playing craps online is faster game play on demand without the other players getting in the way. Most craps jargon can be understood from the context or, if you’re playing the simple bets, ignored. However, to sound like a pro you might want to throw a few of these in:

In a land based casino, Craps is played on a purpose built table made of felt with a diagram showing the possible bets that can be placed. The ends of the table are usually mirror images of each other, which accommodates up to eight players on each side of the table. Each of them takes their turn, clockwise, as the shooter. Online, you will see the same kind of design, but without the other players.

On the table you’ll find a craps “puck”. This acts as a marker to let you know if a game is going on. An active game will be marked by the white side up (ON). If the craps puck is showing the black side (OFF), that gives you the signal to enter a game. Next, you put out your money in cash and buy some chips. Put your chips on the rack, and put only those chips on the table that you’re betting on.

In a real casino, at the beginning of the game, the shooter is presented with multiple dice by the stickman in order to choose a pair. When handling the dice, the shooter cannot pick up the dice with both hands. You are generally asked to pick up the pair with one hand and shoot. Also, do not take the dice off the table since it raises suspicion that the dice are being tampered with.

The rule is that the dice have to hit the back wall of the table when you “shoot”. There are people who believe with some practice, you can improve your chances of rolling the numbers you want.

The ‘Pass Line’ is the only bet you really need to know in craps. It offers low returns (1/1), but with a small house edge of 1.41% it’s a relatively safe bet, and a great starting point. This is how it works: A black marker (OFF) indicates a ‘come out’ roll. This is the best time to bet. Place your bet on the ‘Pass Line’; if the ‘come out’ (first roll) is seven or 11, you win but if it’s two, three or 12, you lose.

Other totals become ‘the point’. These spark the marker to be switched ‘on’ (white) and represent the new winning number. The person with the dice then rolls again until either ‘the point’ appears again, (you win), or a seven comes first (you lose). The game of craps is played with two dice so the possible outcomes range from 2 to 12. Winning or losing depends on whether the bet placed by the player is a ‘Pass Line’ bet, or a ‘Don’t Pass’ bet. ‘Pass Line’ bet is also called “betting right”.

The game begins with the “come out roll.” That’s when the shooter rolls the dice for the first time. If a 7 or an 11 is generated by the come out roll, and you are betting on the pass line, you win and get to throw the dice again for another come out roll. If you win again, you throw again. This is a ‘lose’ situation if you placed the Don’t Pass bet.

If you shoot a number other than 2, 3, 7, 11 or 12, then the game begins to decide if the player wins or not. The puck is flipped over to the white (ON) side and is placed on the number that has been rolled. This is where the house edge is reduced exceedingly.

There are betting options that make you look like a pro. However, they have a higher house edge when compared to the basic bets. For instance, in a ‘Pass Line’ bet situation you should stick to the basic bets.

You are not only entitled to place bets when you are the shooter, but you can also place bets on the outcomes of the rolls from other players. If you see a player on a winning streak, place your bets on him. Yes, winning streaks do exist.

‘Come Line’ Bet is also a basic bet, which is the same as the ‘Pass Line’ bet. The only difference is this bet is placed after the point is made. You win if the shooter rolls a 7 or 11, and you lose if its craps.

Another bet that you can place on the craps table is the ‘Odds’ bet, which the player bets that the point would come out before the shooter sevens out.

Before You Get Started

Before you get started, there are some key things to remember at the table. Betting occurs only when the dice are in the middle of the table and/or when clearly announced by the dealer. Keep the table clear. No hands, phones or drinks should obstruct a roll.

Don’t try and roll outside of your turn. If in doubt, wait for the nod from the dealer. Never take the dice outside of the table; it raises fears of tampering. For the same reason, players should roll with one hand, not two, and shouldn’t switch hands before rolling. A roll should be lower than eye level, and should aim to hit the back wall of the table.

Craps is about the experience as much as the money. If you come away from the table in a good mood, you never really lose. A cool, calm focus is better than flashy, time consuming showboating – particularly if you’re in a superstitious crowd.

Chatter is allowed in moderation. Make the most of your chance to support the players, share a joke and ask for tips. But don’t break the rhythm, or delay a roll when big money is at stake.

Tip the dealer, s/he’s important. Looking generous is important too but NEVER play the ‘Don’t’ bets. You’re betting against the person rolling and, most likely, the rest of the table. These bets are the quickest way to a frosty game. Now you can go to any craps table in a casino, or online, and start playing. Go out there, shake, roll, and win!