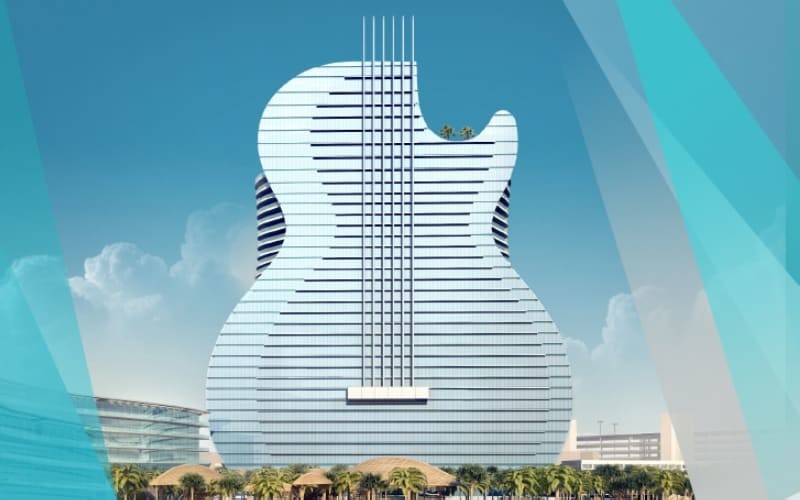 In October 2019, Hard Rock International will open two new major projects. The Hard Rock Hotel & Casino Tampa is opened with the Seminole Tribe. It’s Florida’s biggest Casino. In addition, the first hotel in guitar form with connected Casino opens its doors. A total of $ 2.2 billion has been invested.

The tribe of Native American Seminole Tribe of Florida is the operator of the new casino resorts in Florida. The strain has spread the brand Hard Rock International around the world. The Seminole Hard Rock Hotel & Casino Hollywood has spent $ 1.5 billion on guitar.

It stands symbolically for the brand, whereby the guitar made of glass protrudes almost 140 meters into the sky. It is an architectural masterpiece, which is meant to compete with the landmarks of the entire world. Hard Rock International Chairman and Seminole Gaming CEO Jim Allen was very proud of the impressive building:

The guitar building will attract visitors and tourists from the United States and around the world.

Casino, in guitar form – who invented it?

Architect Klai Juba Wald was responsible for all conversions at the Casino. The Las Vegas architect has delivered the design for the expansion of the Seminole Hard Rock Hotel & Casino Hollywood. The Rockwell Group of New York and Wilson Associates had taken over. Wimberly Interiors from New York was used for interior design and hotel rooms and casino rooms. The landscape designers EDSA from Fort Lauderdale were commissioned to design the outdoor area.

With the reconstruction, the Casino became the flagship of the operator. The guitar Tower shows two guitars standing back to back. On each side you have 6 illuminated guitar sides. The tower houses 638 luxurious rooms and suites.

In addition, a new pool complex has been created on the south side. 5 of the approximately 7 hectare landscape consists of a Pool with caves, waterfalls and green landscapes. Overwater Cabanas are available in sizes from 42 to 74 square meters. A butler Service as well as showers and private shower cabins are part of their Service. There is also a Beach Club.

There is also a 7-storey tower with 168 rooms and exclusive swimming suites, which have direct access to the pool. An artificial lake with the length of three football fields surrounded the pool area. There you can use different water sports.

Extensive expansion of the casino resort with attention to Detail

The existing hotel tower with 465 rooms is maintained. In the meantime, the new building offers 1,271 rooms and suites.

Visitors should be impressed at the entrance by the Installation “the Oculus”. It is a sound-music spectacle that the elements water and fire should be accompanied musically and choreographically. Mark Fuller of WET Design of Los Angeles and the architect David Rockwell of the Rockwell Group from New York, created it.

19 restaurants, 20 Bars and Lounges are to offer the Casino. Cafes, American Grills and Italian Restaurants are planned. At the Daer Nightclub, the best DJs are expected to hang out on 1,700 square meters in the evening. The Daer day club, with a swimming pool of 2,000 square meters.

A Spa with 40 treatment rooms, meeting and conference areas, as well as a shopping area complete the offer of the new Casinos.

The Casino is expanded to 18,000 square meters. There are more than 200 tables for Blackjack, Baccarat and Roulette. In addition, there are 45 tables in poker rooms and more than 3,100 slot machines.

125 million dollars were invested in a new Event Center. There is a new theatre-style venue that can accommodate up to 7,000 guests. With the opening, there will be a new cooperation with the Nederlander Organization – the “first family of Broadway” and the largest producer of Broadway events worldwide. There will be concerts, Life performances and much more on 200 evenings.

The new Hard Rock Live in Hollywood will be inaugurated on Friday, October 25, 2019. The opening concert will give Adam Levine and Maroon 5. On 7. November 2019 is to occur, the Italian Tenor Andrea Bocelli in the event center.

Seminole Hard Rock Hotel & Casino Tampa will be reopening another successful Casino in October 2019. The reconstruction cost 700 million. There is now a 14-storey hotel tower with 562 rooms and suites. 3 Pools and a large Casino. From October onwards, a spa with 14 treatment rooms, an Event Center and areas for shops with men’s and women’s fashion will be added. Overall, the area is significantly smaller than the new flagship.

The Casino has 5,000 slot machines, 179 games tables and a poker room with 46 tables. There is also an exclusive VIP area with private lifts and Rockstar suites. The entrance area is not equipped with a special Installation, but at least there is a piano by Elvis Presley to Marvel. It was acquired by Hard Rock International in 2015. Presley had originally purchased it as a gift for the mother. After the death of the mother, it was stored. Priscilla Presley revived the piano in 1968 and dressed in gold leaf.

Worldwide, Hard Rock International operates 188 cafes, 240 Rock Shops, 29 Hotels and 11 Casinos in 74 countries. Besides, one has the world’s largest collection of Rock utensils-it all started with a guitar by Eric Clapton. In 1971, the first cafes of Isaac Tigrett and Peter Morton were opened in London. In 2007, man sold Hard Rock Cafe International (USA) to the Seminole Tribe of Florida for $ 965 million

New projects are planned in Amsterdam, Berlin, Budapest, Dublin, Madrid, in the Maldives, New York City, Ottawa and Scaramento. So you still want to expand with new casino complexes.