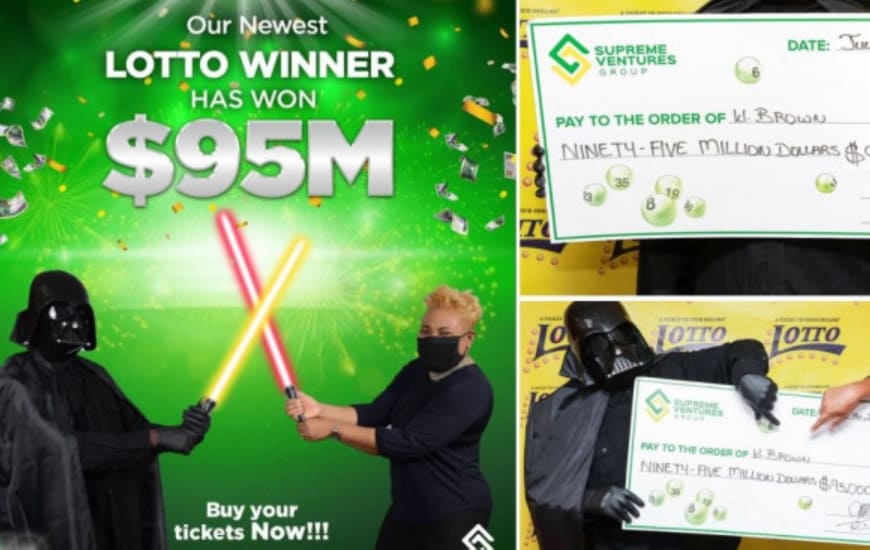 There are always stories of what lottery winners do to collect a prize anonymously. This time a winner in Jamaica dressed up as Darth Vader so that he would not be recognized. The presentation of the check was published in the media on Twitter and is going around the world.

In February 2019, a curious case from Jamaica became known in which a winner of the national lottery picked up his prize in a scream costume. On July 18, 2020, a winner of 95 million Jamaican dollars (560,000 euros) went one step further. He came to the check delivery as Darth Vader, disguised from the classic Star Wars trilogy.

Who is the lucky winner?

In the media, the winner is only known as W. Brown. He had bought the lottery ticket at a sports bar in May Pen. It is a city in southern Jamaica. According to his own statements, he otherwise buys his lottery tickets elsewhere. The winner announced to the media:

I don’t regularly buy lottery tickets from this place. I usually buy my ticket in Old Harbor or Spanish Town. But I was on my way so I just stopped there.

In an interview he also said that he has been betting on the same numbers for almost 20 years. These are his lucky numbers – 8, 9, 10, 19, 27 and 30. He said these numbers were inspired by his life. He knew that someday they would change his life for the better. In an interview he continued:

Life has always been very hard. I come from a poor family. Sometimes I couldn’t go to school because my parents had no money. But I told myself that one day God would help me so that I could help my family.

The draw was seen live on television

He immediately realized the win in the drawing, which he saw live on Jamaica TV on July 1, 2020. After that he was relatively excited. He now describes the situation as follows:

I wrote down the numbers and saw that I won! I was excited and said: I’m finally getting him now! I then took a shower and went to sleep.

He didn’t tell many people about the $ 95 million win after that. He’s currently thinking about what to do with the money. He definitely wants to decide first what his goals are. But he always wanted to own his own bus. He also wants to buy his family a house.

Supreme Ventures Limited operates the Jamaican lottery. The company was very pleased with the profit. It was shared on Twitter:

The Jamaican lottery does not provide for anonymity

The player has won the normal Jamaican lottery. There you have to type 6 out of 38 numbers. The player who correctly guesses all six numbers wins the jackpot. Should several players crack the jackpot, the total profit will be divided. The jackpot guarantees a win of 25 million Jamaican dollars (around 150,000 euros). A ticket for the lottery costs 100 Jamaican dollars, which is roughly 59 cents. The draws are always made on Wednesday and Saturday. The chances of winning the main prize is 1: 3,262,623.

In Jamaica, lottery winners must collect their winnings. In return, the operators are allowed to advertise the payout. There are many examples of Jamaicans trying to remain anonymous despite winning. Sometimes it’s a scream mask, in other cases a smiley mask and now a Darth Vader too.