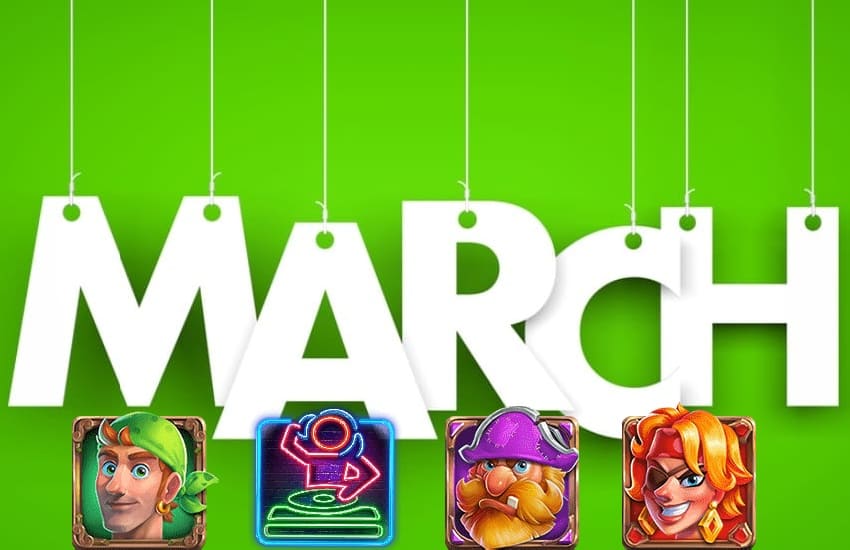 This week, too, many game providers have published new slots and can be found in most online casinos. In the following I will briefly present the various slot machines with the most important information.

This week, NYX Gamevy, Yggdrasil, Play’n Go, Pragmatic, Red Tiger, Nolimit City, Microgaming and many other software manufacturers have released different slots. From a fruit slot to pirate slots, everything is included.

Pirates’ Smuggles Paradise is a 5 reel slot from the provider Yggdrasil, which can be played on a 5×5 grid pattern. The slot machine distributes the winnings as cluster winnings, similar to the well-known Aloha slot! Cluster pays. To get a win, only six or more of the same symbols are needed.

The classic card symbols of clubs, hearts, spades and diamonds were chosen as low symbols. Thematically relevant symbols such as a pirate hook, a sword, a rum bottle and a pistol also rank among the middle symbols. However, a parrot, the captain and two different pirates were chosen as the highest signs.

The slot also offers a so-called dropdown win. As soon as you get a cluster win of at least six or more of the same symbols, these symbols are kept in their positions (they become sticky). The chance of higher winnings increases, because this feature only ends when no new profitable symbols appear on the reels.

If two winning patterns are present, the symbols with the lower value are converted into the symbol with the higher value.

7 free spins are granted once you have collected three rolled up treasure cards. Here you can choose between three different free spin features. In the “winning case” two winning symbols are added to the dropdown feature. If you opt for the “high seas” free spin, all low symbols, i.e. all card symbols, are removed from the reels and replaced with new symbols. Finally there are the multiplier free spins. Here the multiplier is not reset after a spin and accumulates during the free spins. Each complete row of winning symbols increases the multiplier by a factor of 1.

Riches of Robin from Play’n GO

Riches of Robin is a slot with an appealing folk style guitar soundtrack and in the background you can see the castle in Nottingham. The slot is played on 5 reels, 3 rows and with 20 paylines. The card symbols of spades, hearts, diamonds or clubs appear in noble style on the reels, which are among the smaller symbols. The higher figures include the various well-known characters Maid Marian, Little John, King Richard I, Alan a Dale and Friar Tuck. Robin, the legendary hooded thief, is both the wild symbol (replaces all symbols except Scatter) and the highest value symbol in this game.

In addition, there are the so-called “robbery re-spins”, which can be triggered in the base game. If you get 4 or more money bags, there are 3 re-spins. If you get another money bag during this time, the re-spin counter is reset to 3. In the end, all money bags are added up and the profit is credited to your balance. There is also a jackpot money bag that can raise up to 1000 times the bet.

The slot can be played from a minimum bet of 10 cents, but max. € 100 per spin. There is no progressive jackpot that can be won on the Riches of Robin slot, but you can still win very solid payouts. The profit factor is 10,000 times, so you can achieve a maximum profit of € 1,000,000. The payout ratio is a whopping 94.43%, which is more than good enough even for a very volatile slot.

In addition, you can win so-called “Quick Hit Jackpots” for every non-winning spin. In this case, you will be rewarded with money bag prices of 20x, 100x or 1,000x. A nice gesture that makes even the dead spins a little more exciting.

I’m a fan of themed slots and praise Play’n Go. The fluid animations, the appropriate background music and the detailed characters bring the legend to life before your eyes. The functions between the base game and the free game have been perfectly coordinated. Riches of Robin is also a high potential slot.

Dance Party is a new online slot from Pragmatic, which is similar to the somewhat older Extra Juicy slot. The slot machine has 5 reels and a total of 243 lines divided into 3 rows.

The letters A, K, Q and J were chosen as smaller symbols. This is followed by a blue, an orange double bar sign and three sevens. A neon-colored DJ was chosen as the highest symbol. A CD with the inscription “Dance PARTY” was chosen as the wild symbol. This symbol only appears on reels 2 to 5 and replaces all symbols except for the diamond. The diamond serves as a scatter and can appear on all reels.

Golden Cryptex from Red Tiger is definitely a unique online casino slot and is not a typical slot machine, as it is based on 3 paylines and that on 5 reels and 3 rows.

What exactly is a cryptex? It exists in real life and is a relatively new idea that became famous in Dan Brown’s novel The Da Vinci Code. A cryptex is a cylindrical device with rows of symbols that can be rotated and realigned. When the user turns the symbols into the right combination, the cryptex is opened to reveal its hidden secrets.

What makes the Golden Cryptex slot so unique is the cracking of the secret code. In other words, free spins are only triggered by cracking the cryptex code.

The game’s 5 reels are shaped like a solid golden cylinder. There are five fields above the cylinder, the so-called cryptex code.

The usual letters JA and the number 10 were chosen for the lower symbols. Higher symbols are a horseshoe, a star, a bell and the number 7. On the left side of the cylinder there is a golden arrow pointing to the middle row . To crack the code, 5 aces must be collected on this payline. As soon as this happens, you will receive the win and the 10 golden free spins.

In the case of three or four aces that land on the golden pointer, the game can re-spin the rows that are missing aces. This is the feature that is called the “second chance”.