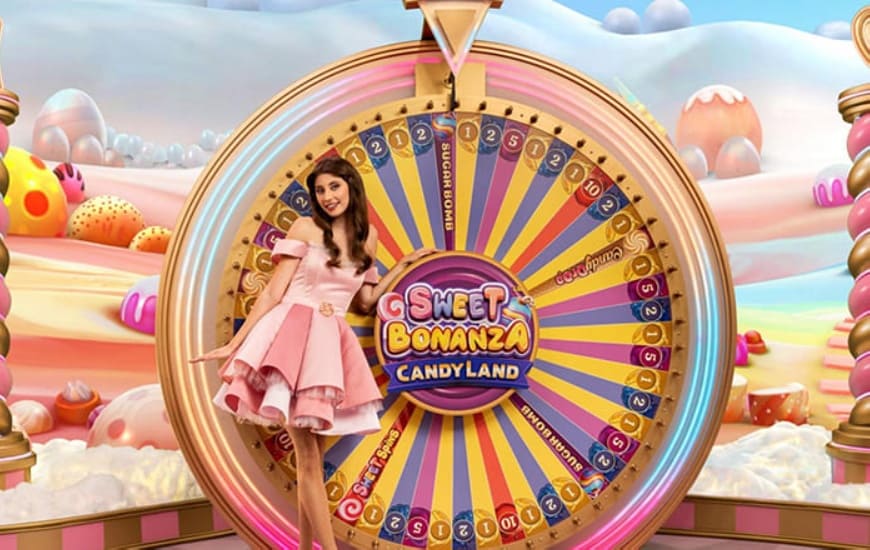 As the popular software provider Pragmatic Play announced on November 24, 2021, the live casino offer will be expanded to include another exciting game. More precisely, the sensational slot hit Sweet Bonanza was brought to the live casino. But how does the newly released casino hit Sweet Bonanza Candyland work and in which online casinos can the game be played right now?

The well-known game developer Pragmatic Play added another game to its game portfolio a few days ago. The live game Sweet Bonanza Candyland is now available in selected online casinos. Many a casino operator should hope for cross-selling potential, as this exciting game combines classic slot machines with live casino games. It was only in September of this year that we reported that Evolution Gaming had launched the 2,000 year old game “Fan Tan”.

How does “Sweet Bonanza Candyland” work?

This recently released live game from Pragmatic Play is basically explained very simply. The players first see a large wheel of fortune on which there are, among other things, two bonus games to discover. There are a total of six different betting positions on the wheel of fortune. While four of these positions show a fixed multiplier of x1, x2, x5 and x10, the other two positions contain the mentioned bonus games. In one position you can win ten free spins for the popular Sweet Bonanza machine. The Candy Drop bonus game starts in the other position (= multiplier bonus game). Here, the player is shown a virtual Plinko wall maze, where the symbols are gradually dropped and later land in a multiplier.

In addition, Sweet Bonanza Candyland has a so-called Sugar Bomb feature. A random multiplier of up to x10 is determined and then a respin is triggered. Optionally, a booster can be selected to increase the possible multiplier up to x20. Pragmatic Play himself confidently describes his new live game as follows:

“The dynamic lighting, the bright colors, the animations and the sounds that seamlessly merge are a feat of the senses that creates a truly unique game.”

Sweet Bonanza Candyland has been available to interested players since the end of November 2021. According to the developer Pragmatic Play, the live broadcast is from a newly designed casino studio in the Romanian capital Bucharest. Of course, the casino players have the opportunity to play this exciting live game every day around the clock. According to its own information, Pragmatic Play currently develops and publishes up to five new slot titles per month.

“Sweet Bonanza is one of our most famous slot machines and we are thrilled to have brought it to our Live Casino studios with the introduction of Sweet Bonanza Candyland”. (…) It is a really unique addition that underlines Pragmatic Play’s ambition to become the leading multi-product provider in the industry on our way ”.

In which online casinos can the new live game be played?

Basically, players from Germany are currently not allowed to have access to the newly released game from Pragmatic Play. This is because the State Treaty on Gaming (GlüStV), which came into force on July 1, 2021, does not allow the offering of live casino games. As early as January 2021, we asked ourselves in an article in this context whether there was still a future for live games in Germany. The fact is that there are currently still online casinos in which live games, including Sweet Bonanza Candyland, can be played in real money mode. But in which online casinos is the classic Sweet Bonanza slot machine, which was released in 2019, currently still available?

Pragmatic Play is a leading provider of slot and live games in the online gambling world. A few days ago the renowned software developer published a new type of live game called Sweet Bonanza Candyland. Unfortunately, at least the online game libraries in Germany have not been offering live games for some time, as the new GlüStV specifies this. Nevertheless, it will be interesting to see how the live game will be accepted by the players.