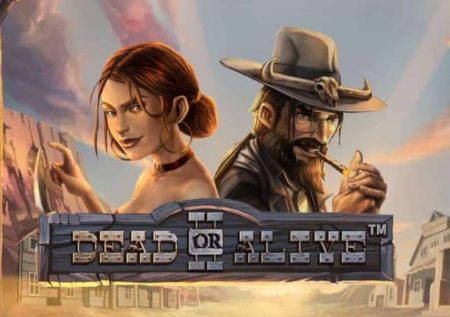 You can find out whether this slot game can also be entered in the classic list in our Dead or Alive II test.

There are probably few casino games that gamers have been waiting for more impatiently than Dead or Alive II, the successor to the fantastic NetEnt classic Dead or Alive. Every regular casino player probably knows this slot, because it has always been one of the games with Starburst or Book of Dead that the casinos like to give away free spins. All of these machines have in common that you get along with a few lines, are easy to play and pay high winnings.

When NetEnt decided to reactivate the five gunslingers, there was indeed a murmur among the player community. The speculations as to what the successor will look like did not end. The developers were also reluctant to provide much information. Shortly before the release in April 2019, there was a little more information about this slot. NetEnt confirmed in several interviews that there will be no major changes in the base game.

Of course, the graphics and animations are completely renewed. However, there are 5 reels with 3 levels on which there are 9 paylines. It has also been said that there will be a few surprises in the free spins. However, it was left open what those are. Now that the waiting is over, we also know what has remained the same and what additional adventures await us in the Wild West.

The first impression of Dead or Alive II

After a few seconds, we can already say that everyone involved really went to great lengths in the new edition. Even if there is a known image and the individual images represent the same symbols as the original, they are fantastically designed. Regardless of whether it is the lower card values 10 to A or the higher symbols, the whiskey, the cowboy boots, the cowboy hat, the pistol and the sheriff star, they all look good.

In our opinion, the 5 gunslingers who appear as wilds have even outdone themselves. The 5 transparent rolls are in a wooden frame and give a view of the orphaned main street. You can literally grasp the tension that is in the air. The crackling atmosphere is supported by a grandiose soundtrack.

A simple, slow western guitar plays a classic Wild West run. The wind whistles through the streets of the city and in the distance you can hear the bells of the church tower. Every now and then a dog barks, a coyote howls in the distance and somewhere hidden you can hear the clatter of a rattlesnake. Even the 5 rollers are locked in stereo from left to right. The first two rollers are used to load a revolver, the middle roller is to snap the magazine into place, the fourth is to turn the drum and the bracket to be tensioned on the fifth roller. Profits are made with a shot or a special guitar effect. Nothing was really left to chance here.

Gameplay at Dead or Alive II by NetEnt

Before we face the villains, of course, we have to determine what we are willing to risk. The slot has 9 fixed paylines that are played on every spin. With NetEnt it is common to set a coin value and to determine how many levels you want to play per round. The coins per line are called levels. With minimal risk, the rollers can be rotated from just 9 cents per round. The maximum bet is a bit too low for high rollers at 9 euros. However, the betting range should be sufficient for most casino visitors.

All nine paylines are counted left to right from the first reel. At least three identical symbols in succession are required for a win. Since you naturally win less with 9 lines than with a MegaWays slot, you can confidently switch on the AutoPlay. Up to 1,000 laps can be started automatically. In the advanced AutoPlay settings you can also set various parameters and determine when the AutoPlay should be stopped.

So that AutoPlay doesn’t get too boring, NetEnt has built a few gimmicks into the game. At this point, we will not reveal what those are. You have to find out for yourself. Just a little tip: just click on a few objects on the screen.

Of course, the 5 nasty gunslingers, Apache, Billy, Belle, Della and Jesse, appear again as wild symbols. They have a wild symbol and can replace all other symbols except the scatter. This gives you the chance to create new or longer winning combinations. In addition, the wilds have the highest win value if they are on a payline. However, we only had this pleasure extremely rarely in our Dead or Alive II slot test.

The crossed pistols with the bull skull are the scatter symbols. If three of them can be found scattered on the screen during a spin, 12 free spins will be drawn. Before you can start the free rounds, you have the choice between three different locations where the free spins are to be carried out. Each location has a special characteristic.

In the Train Heist free spins, the multiplier is increased by a factor of “1” with each game. There is also another free spin. If you reach the 16-fold multiplier during these rounds, there are automatically 5 additional free spins. The multiplier continues to rise. In our test, we managed to screw it up to 28x.

Again, all wilds become sticky wilds. When 2 wilds land on the same reel, they turn into a double multiplier. If a third is added, it becomes a triple multiplier. If you have at least 1 game on each reel, there are 5 more free spins. In the high noon free spins you can win up to 100,000 times your bet. However, this is also the free spin mode in which you win the least.

With a theoretical and tested repayment rate (RTP) of 96.8%, NetEnt also gave the slot game an above-average value. This is certainly another incentive to play the real money slot.

The Casinovas verdict on the NetEnt Slot Dead or Alive II

DoA II surpasses our expectations without any ifs and buts. They have managed not only to maintain the original gameplay in the base game, but to lift it to a higher level with great attention to detail. With the three different free spin options where winnings up to 100,000 times are possible and a good RTP of 96.8%, you will certainly have the interest of casino visitors on your side. If you are one of the few casino visitors who have never heard of DoA, you should not miss the opportunity and play the NetEnt Slot Dead or Alive II here with us for free. If he likes you, you can then compete against the 5 gunslingers in one of the online casinos we have tested and classified as safe with real money bets.