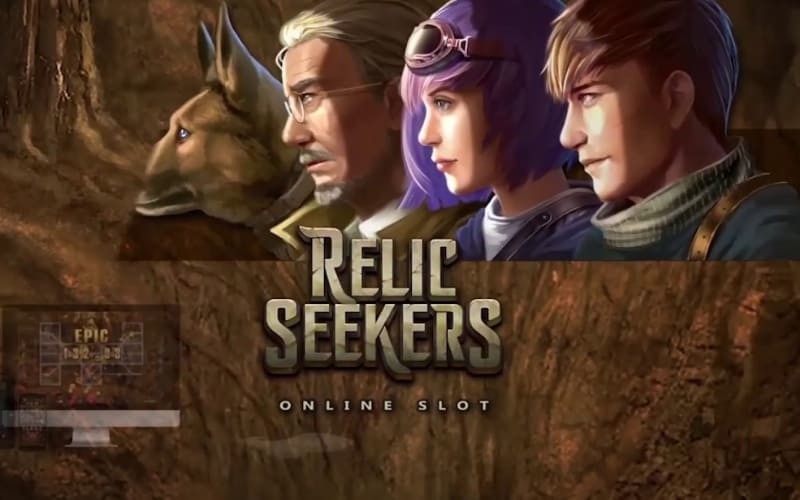 Microgaming, Relax Gaming, Yggdrasil and Pragmatic Play have brought new Slots to the Online Casinos. As always, I have tried the new slot machines and briefly present them in the following article.

From Vikings to Western to Sumo, a wide range of topics was accessed by software manufacturers. There are new High and Low Variance Slots, with simple animations and elaborate graphics. The software providers therefore offers a wide range of new Games in the second week of August.

Tiki Vikings is a new 5 reel Slot with 3 rows and 20 paylines. This is a mix of Viking and Hawaii Slot. 4 letters were selected as small symbols. As higher symbols, there is a Viking with blue, blonde and red beard. the Highest Symbol is the logo of Tiki, Vikings is.

There are no Scatter or Wilds. In the Basegame, however, a Lock Re-Spin Symbol can be triggered. As soon as 3 higher symbols appear, they are held on the Slot and all other reels spin again. Each additional winning symbol is held. On the left side, a “icon Upgrade”indicator is filled for each Respin. If the display is full after 3 Spins, the respective Symbol will be upgraded. The next higher Symbol after the Paytable appears.

The stakes range from 10 cents to€250 on the Slot. The maximum profit is for a full screen with the lettering Tiki Vikings 75.000€, which corresponds to 300 times the maximum bet. The payout ratio is 96.01%.

Overall, the Slot is quite fun designed. The background music matches the Hawaiian theme. From my point of view, the Respins are also triggered quite frequently, but have often achieved a hardly worth mentioning profit of less than 10 times the use only. It is therefore a Low Variance Slot.

Money Train is a Western Slot with 6 reels, 4 rows and 40 paylines. Diamonds, hearts, spades and crosses were chosen as symbols for small wins. High payouts there are for a lady in Blue, a bandit in Green, Indian Yellow, and an old man in Orange. Two crossed shotguns serve as Wild. A Bonus Symbol, which can appear on reels 1, 3 and 5, serves as a Scatter.

3 Scatter start the Money Cart Bonus Round. For the 80-times the round bet, you can buy the free games. You can see a Slot where only hay bales, multipliers or bandits appear. Bandits and multipliers will stop. You have 3 Spins. If only hay bales came 3 times, the bonus feature is over. The multipliers are added together at the end. Special Features grant the bandits:

The Indian as a Collector-he collects all the available multipliers in himself together.
The Bandit in green as Widener-it extends the playing field to the left or right by another roller.
Hat with money-at the end of each round, all multipliers are added.
10 cents to 50€ can be used on the Slot. Up to 20,000 times the bet you can win. The payout ratio is between 96.2% and 98%.

It is a High Variance Slot. You can win a lot, but you can also lose. The free spins are triggered quite rarely, with me it has almost 150 Spins on 10 cents needed. The profit was hardly worth mentioning. In demo mode I had tested the purchase option. In 10 cases, I only got 3 times over the purchase amount-so be careful when using.

Hot Chilli is a 3 reel Slot with 3 rows and 9 paylines. Tofu, meat pieces, mushrooms, corn, shrimp and bacon rolls were chosen as symbols.

The Wild is a Chilli, which can also carry up to 5 times the multiplier. The Wild replaces all symbols except the tofu pieces. Except for the multiplier Wilds, there are no special Features.

This is a Low Variance Slot. When trying out I was able to play up the Slot well with small wins. It is very much based on animations and Entertainment, which is rare in Pragmatic Play. It is once something different from the manufacturer.

Yokozuma Clash puts Yggdrasil completely out of a Sumo fight. The Slot has 5 reels 3 rows and 243 winning paths, which pay out in both directions. Spades, crosses, hearts and diamonds were chosen as symbols. Higher symbols are a dragon, a turtle, a Tiger and an eagle. As Wild there is a Symbol with the same name. A free Spins Symbol appears on the 1st or 5th reel as a Scatter.

Below the Slots of two sumo wrestlers stand. You can randomly grant Features. The Sumo on the left with a blue Mawashi (Riku) uses random Wilds, the rights of a sumo wrestler with a green Mawashi (Haru) sets the random multipliers. As soon as 2 free game symbols appear, a wrestling match is started with one of the two wrestlers.

In the fight the profits, decide on the output of the ring battle. The counterparties face each other in the middle. You have to push the other 7 fields in one direction to win. When winning from left to right, your player wins a little space. If on the other hand is won, the opponent wins.

The opponents are Daisuke in the first round, he adds random Wilds on attacks on the Slot, or O’conner, he can put 2-to 4-fold multipliers. The attack power of the two is always 3 Squares, the player has only one Power of 2 squares.

If you win, there is a final fight against Yokozuna. It has an attack power of 4 and adds 2 to 4 Wilds and a 2 to 4 times multiplier to the Slot when it attacks. If you win, the winnings from the bonus feature will be doubled.

In the basic and free games there is a Sumo Clash Feature. If 5 symbols appear on a series, there is a tie in the case of the wrestlers, and 2 to 4, the winning symbols will be added to the Slot.

I’ve been playing this game for over a year now. But there were also in the bonus game again and again, smaller profits. Overall, I find the Slot made appealing, especially thanks to the various animations.

Quickspin with Sticky Bandits Wild Returns, a Remake of the classic Sticky Bandits in the Online Casinos. The slot machine has 5 reels, 4 lines and 40 paylines. 4 letters for small wins were chosen as symbols. Higher payouts are available for a Whiskey bottle, cigars, a bandit with a white beard, a bandit with a shotgun and a redhead Bandit.

The mechanical 3-reel Slot only appears on the 5. Roller and awards 1 to 3 spins of a one-armed bandit with 1 payline. You can win up to 500 times the bet on the Slot.

3 scatters trigger 7 free spins. When a Bandit appears on the reels in the free spins, a Lucky Shot is fired. The Bandit turns into a sticky Joker (with skull standing until the end of the free spins) or other symbols are turned into simple Wilds.

I had been testing Sticky Bandits Wild Returns for a relatively long time. There have always been smaller profits. Especially the 3 reel Slot has been triggered many times. I have to wait for the free spins 180 Spins-they didn’t even pay 100 times, but there is some potential. Overall, I find the Slot produced very high quality, so the gameplay is relatively large.

Relics Seekers is a new Slot from Pulse 8 Studios, which was released on Microgaming. It is a 5 reel Slot with 3 rows and 25 paylines. Red, purple, blue, green and yellow characters are used as small symbols. Higher symbols are a dog, a young girl, an older man and a young man. As Wild a lamp was chosen, as Scatter an amulet.

Winnings trigger an Avalanche effect (Rolling Reels). Winning symbols will be removed and new symbols will follow. After the 2nd, 4th and 6th avalanche, one of the three protagonists becomes an additional Wild. The Wilds remain until the end of the spin.

The Slot is not bad graphically and also relatively varied by the Gameplay. Overall, however, it is rather difficult here to get good winnings, the game somewhat reminiscent of Gonzo’s Quest. Even many Wilds are not a guarantee of good profits. The free spins had once after almost 60 Spins, however, the profits remained strongly limited.

Conclusion: Some Games are not bad

From my point of view, the new Yggdrasil Slot Yokozuna Clash is highly recommended in terms of fun and chances of winning. With Money Train Relax Gaming has a new High Variance Slot, which is also not bad. Otherwise, I liked Hot Chilli as a low Variance Slot from Pragmatic Play well – the animations the company succeeded well. Sticky Bandits Wild Returns is also a good slot machine game, but you need good luck at the Quickspin Slots. What are your experiences with the new Slots? Write it in the comments.