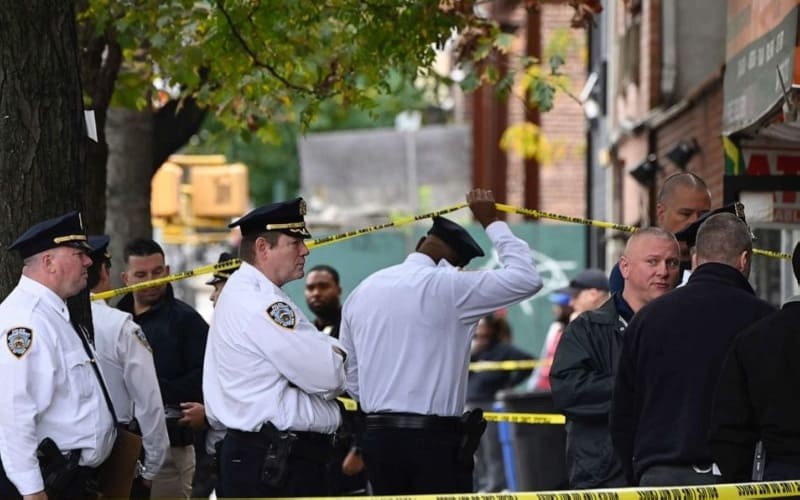 In New York City, Brooklyn, four men were killed by gunfire. Two more men and one woman were also injured on 12 October at 7 o’clock. The background for the act was perhaps the visit of an illegal gambling club.

The police were called on the morning of Saturday (12 October 2019) to the crime scene in Utica Avenue in Brooklyn District of New York. At a press conference, a spokesman said that the forces had offered a “chaotic Situation”.

It was reported that four dead victims were found at the age of 32 to 49, and two more were not injured in life-threatening manner. In addition, two small arms have been secured. A Revolver and a 9-Millimeter gun were seized. In a first statement of the police said:

What did the police find?

In a report, the police described that she was called to the first floor of a run-down residential building. They arrived in a sparsely decorated apartment. There they met about 15 people who played with cards and dice.

The neighbors had often complained about an unlicensed Social Club. The room always wore a sign with the inscription “Triple Aces Private & Social Event Space”. The apartment was probably used as an illegal Casino, that among other things attracted customers with sports cars and bikers.

On the Morning of Saturday shots were fired in the Club. When the shooting was over, four people were dead and three injured. In part, the victims of more than 15 bullets were perforated. The victims were identified as Terence Bishop (36), Dominick Wimbush (47), Chester Goode (37) and John Thomas (32). Two men came from Brooklyn, the others came from outside. Two men and one woman suffered gunshot wounds, but they should not be life-threatening. An eighth Person was hospitalized with leg injury. The police said that the injury was caused by the flight.

Are backgrounds known for the act?

The motive for the shooting was not immediately clear. However, gang activity was excluded relatively quickly. In North Brooklyn, the gang crime this year, to be increased considerably – at least here they gave, but once the all-clear.

Currently, we are trying to clarify whether it is a dispute in gambling or a simple robbery. Although you have found signs of gambling in the Club, you can not undoubtedly say, whether the shooting is related to gambling. So far, no suspects have been identified by the police.

Neighbors are not surprised by the operations

According to the neighbors, the events in the Club would often attract crowds on motorcycles. Greg Todd is a member of the Community Board 8 and said to the press:

It’s a Biker meeting point. Sometimes there were 20 bikers at the door, a big Crew.

Isaac Mickens is an organizer of the Community Boards. He described the Club as a gambling house. She had only been equipped with a small table and a simple Bar.

At the time of the Act were 15 people in the small room. Evidence of illegal gambling has been secured. So far, there is no evidence that the involved alcoholic drinks had been consumed or drunk.

The police explained that there have been no complaints about the Social Club lately. However, local residents said that several weeks ago the police was called to a brawl in front of the Club.

Only the Building Authority received a complaint in November 2008. The premises were used as a business. A men’s club should be there 7 days a week. However, after the investigations it was found that there were no infringements.

The 79-year-old Samuel Revells rents the premises to the club operator. He did not want to announce the operators, but said that they are very good tenants. He told the press:

It’s a social Club. They’re good tenants. I’m here every day, but I don’t know what’s going on there. I’m just sorry about what happened.

Second quadruple murder in a week

The shooting is the second four-time murder that the city of New York has shaken within a week. On Saturday, police arrested Randy Rodriguez Santos. The homeless was accused of attacking five other homeless people with a metal rod in Chinatown. Four homeless people died, one was hospitalized and fighting for his life.

It’s also the second mass shootout in Brooklyn for 3 months. At the end of July 2019, 11 people were injured in a shooting and one man was killed when two armed men opened fire on the crowd during the 56th annual Old Timers Day Block Party. At that time, however, the police saw links to gang crime.

In New York, killings with firearms are certainly not uncommon. However, even “Daily News”had reported that the new bloodbath has increased the number of murders in New York to 257. There are 9 murders more than in the similar period of 2018.