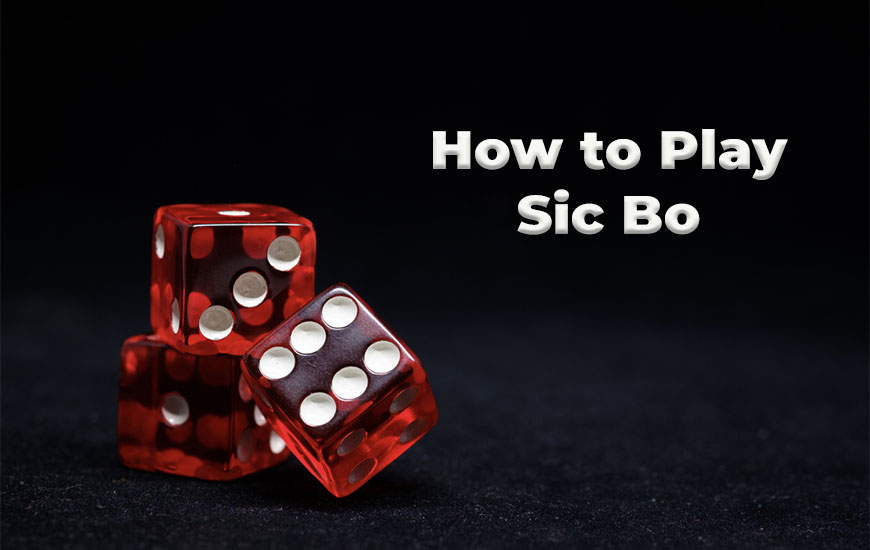 Since Evolution Gaming brings the game live Super Sic Bo to online casinos, I wanted to take a closer look at the classic craps. First of all, I will look at the chances of winning and the rules of the game. Then I explain the special features of the new Evolution Gaming Sic Bo and also show where it can be played.

Sic Bo is a very popular craps in Asia. It is said that it has also emerged from the British Chuck a Luck and has arrived in China by British sailors. In China, it was further developed by Chinese emigrants at the beginning of the 20th century. It was brought to the United States in the early 20th century. Especially in Macau, Las Vegas and Atlantic City, Sic Bo is part of the repertoire. The game is also known as Grand Hazard, Big and Small, Birdcage, Dai Siu (or Tai Xiu) and Hi Lo. In Portugal, it is known as Cussec.

Evolution Gaming has recently launched the new live Game Super Sic Bo. It became one of the most curious Live Sessions out there.

How to Play – rules of the game at Sic Bo

Sic Bo is played with three conventional dice (with 6 sides). The player tries to predict which Numbers will be rolled and has different options to bet on a game. The dice are located in a bell-shaped cube tray and are automatically diced by vibrations from the bottom. Since the cube container is reminiscent of a bird cage, it is also called Birdcage. After the spin, the Croupier tells the fallen dice eyes and the corresponding winning options light up on the Sic Bo.

There are different betting options on the Sic Bo. According to the probability of winning, the various payout ratios are determined by the Online Casinos. Basically you can bet on the appearance of a certain number, a pair or a triple. It is also possible to bet on the different eye sums of the three dice (except the 3 and the 18, because there are only Triple 1 or 6 options). In addition, there are simple chances (as with Roulette), whereby you place here on large (Big) or small (Small) numbers or even or ODD EYE sums.

Up to 190 times you can win, however, come Triples very rarely. You can certainly try to maximize the profits through the betting strategies, but in the end Luck also decides here. Either it comes or it doesn’t come-similar to Roulette.

Super Sic Bo works with multipliers, as is the case with Evolution Gaming Lightning Roulette. After the time to place, the dice are set in motion. At the same time, multipliers are placed randomly on the playing field, which are intended to carry up to 1,000 times the winnings. If the corresponding field lights up with a multiplier, the winnings are increased accordingly. The higher profit potential (with multiplier) reduced other profit ratios

Evolution Gaming’s Super Sic Bo is usually shown in the Baccarat category at the streaming manufacturer. You can find the Game at LeoVegas, Royal Panda, 22Bet, SlotV or MrBit. Not all online casinos have integrated the craps, but there are more and more.

Personally, Sic Bo reminds me of playing automatic Roulette. But I have to confess that I find the boiler game more interesting. Nevertheless, you can try Sic Bo once, the rules are very simple. The multiplier at the Super Sic Bo also allows you to win properly if you bet on the right fields. However, you should not overdo the use per round.

The different developers of this casino dice game

As you should have already registered, there is not a large number of software developers who have this dice game variant in their range. That shouldn’t bother you at all, as the versions that are available to players in India promise you enough dice fun. In addition to the online table versions from Playtech and Microgaming, you will also find a Live Sic Bo version from the industry leader Evolution Gaming as well as some other variants from well-known game manufacturers.

Conclusion: Online Sic Bo – one of the best dice games

Regardless of whether you have already had experience playing Sic Bo or not, we can assure you that the best online casinos recommended by Casinova.org offer you the best overall package. Finally, we made a comparison of the Sic Bo casinos. There are not tens of thousands of variants of this dice game, but there is no need, because this small, fine number is completely sufficient to offer the players what they want.

The chance to start with bonus credit, to be able to play a live version as well as to be able to play the game mobile, are only a few proofs that it is worthwhile to play in the best Sic Bo online casino. Choose your bet and let the dice decide your luck.